The unremarkable adventures of a boy who grew up trying very hard to become a woman. My success has been partial; the fun has been enormous and the problems often overwhelming.

On arrival in Florence, my first port of call was the Palazzo Vecchio – the town hall – which is a striking building, with a stunning interior. There I purchased a Firenze Card, which for €85 gives three days unlimited access the City’s museums and galleries and – perhaps more important – facilitates fast-track access, thus enabling one to avoid the enormous queues that develop at the major attractions. I explored the stunning painted interiors of the Palazzo, and enjoyed the views afforded from its upper floors, across the city to Il Duomo and South-West across the river towards the Boboli gardens. It is possible to climb the tower of the Palazzo for an even more spectacular view, but there was a long queue, so instead I set off to explore the city centre and find dinner. 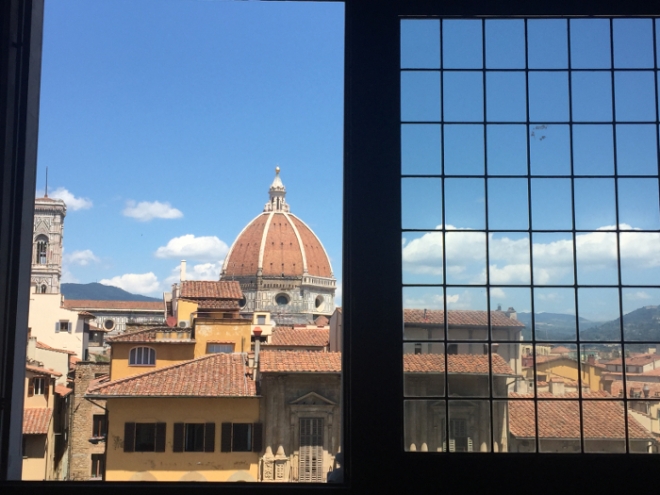 After I had eaten, I followed a recommendation from the Lonely Planet guide, and stopped for a drink on the rooftop bar of the Continentale Hotel, La Terraza. There was a short wait until a place became free, but it was well worth it because the views were impressive. The first photograph was taken looking east along the Flume Arno, while the second looks south-west across the ancient Ponte Vecchio, which is lined with shops selling souvenirs and cheap jewellery. Just visible in the distance are the walls of the Palazzo Pitti. 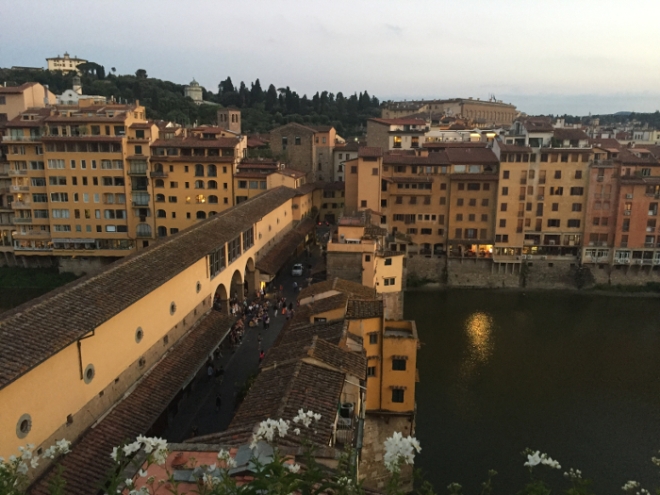 On the second day, my first port of call was the Mercato Centrale, which showcases the richness and variety of Tuscan produce, its stalls laden with local cheese, cooked meats, bread, fruit and vegetables. It’s also a great place to eat, with plenty of cafes serving food at very reasonable prices.

After lunch I left the Mercato Centrale via its north-eastern side and happened upon the Ettamo Glataria where I enjoyed a taste of four sorbets, accompanied by an espresso – a heavenly chocolate, two fabulous and extremely intense fruit sorbets (blackberry and raspberry) and vanilla sorbet. They were all gorgeous. On the way out I noticed a sign proclaiming the café to be no. 1 for gelato on Trip Advisor. In my humble opinion the accolade is very well merited. 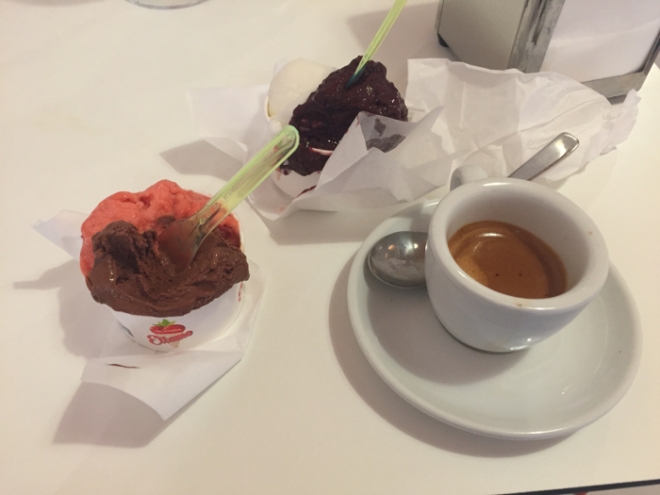 I was able to deploy my Firenze Card to jump the huge queue at the Galleria dell’Accademia. This museum has a stunning collection of renaissance art, but its most famous exhibit is Michelangelo’s 3m tall David. I had seen photographs of this astonishing sculpture before, but it was extraordinary to see it “in the flesh” – it was even more striking than I had imagined. A kind American tourist saw me struggling to take a selfie and offered to take the photograph of me beside David.

What is striking about the Galleria is that it is devoted to the work of local artists – a remarkable testament to the uniqueness of the explosion of artistic innovation that occurred here 600 years ago.

After a little shopping for souvenirs, I made my way to the Museo del Novecento, to enjoy some contemporary art. While this is an excellent museum, and one that I would be pleased to discover in most cities, its collection was much more modest in its depth and significance than the Galleria or the Uffizi. While these latter two boast large collections of work by artists of extraordinary importance, they remain dominated by Renaissance Florence, and of course the history of art since then has been rich and diverse.

I finished my day at the Palazzo Strozzi, enjoying dinner in its cafeteria.

Just a girl next door...I was born male, but from my earliest years a part of me deep down always wanted desperately to be a girl. She has grown up with me, and needs to escape, breathe the air and walk the green hills of Yorkshire from time to time. Although she's concealed by clouds for most of the time, the girl within is tied up with all that people think is best in me. These pages give her a little space to articulate how she feels. View all posts by Karen Smith